We have a daughter.

Your Glory // All Sons & Daughters

We were at the second to last light before turning into LA Fitness. It was a Wednesday. We had just finished some coaching calls with clients, so I didn’t see the message come in when it did.

A friend had so thoughtfully texted me to let me know she was pregnant. I seriously appreciate those texts and emails, but they also make me feel so fragile. Like everyone knows we’ve been waiting all these years while they have their first, second, third child.

My soul has ached for the last five years. Intermittently, of course, because I am so grateful for our current, baby-less life. Jesse takes care of me so well. We have a business we love. And we adventure together and laugh a lot and love spending time with the incredible people in our life. And, Jesus! Well, he’s been so good to me all along the way, too, whether I get what I want or not. He’s changed me for the better. Nevertheless, when I read emails and texts and see social media posts about someone else having a baby, my soul always aches, even if just a little bit.

But, let’s be honest. This time was more than just a little bit. Hot tears plummeted down my cheeks, just before we pulled up to the light. I cried to Jesse about how I just feel so stupid sometimes, being the girl in the room people tread lightly for. I’m so tired of being that girl. He listened to my cry-rant, the way he always does.

I shake my head in disbelief. Silently, I beg God. “I know others have it harder, with other difficulties, but Lord if you could just please spread out this pain. Divvy it up. Take the weight off. Carry this for me. I just don’t know how much longer I can take this.”

But just before it did…

My phone, sitting in my driver’s side cupholder, well, it rang.

The same sense of excitement and anxiety rushed through us, like it had two other times before. You see, you think this is the call, but after a couple of false alarms earlier in the year…we just couldn’t be sure. Plus, the last few months had really been a doozy and I had attempted some defensive, protective barriers to shield this vulnerable heart of mine.

In April, we learned that the agency was expecting 22 new files and that we were 4th in line to receive a referral for the age we specified. In May, we learned we were at the top of that list and that they were still waiting on those files. TOP OF THE LIST!! In May! Months rolled on. Families were matched.

Jesse had a feeling it was going to be August. We prayed boldly and specifically that it would be August.

September…Still waiting on the remaining 9 files…
October…
November…
Those months were rough.

Disappointments. Letdowns. Setbacks with our paperwork. Redoing appointments, payments, things we’d already done multiple times. I laid off the prayers. I didn’t even know what to say anymore.

Just before our 8th wedding anniversary in November, the Lord rejuvenated my faith (probably for the 10,000th time in the last 5 years) enough for me to boldly approach him again with a very specific prayer…

Straight from one of my Instagram posts, from November 17th…

I do know God sees me and hears me and has plans that’ll blow us away. And even if, once again, our prayers go unanswered, we can surrender our fears at the foot of the cross and rest assured that even though this journey is sometimes painful, there is purpose in his plan. ‘Let us then approach God’s throne of grace with confidence, so that we may receive mercy and find grace to help us in our time of need.’ Hebrews 4:16”

So, there we were, on Wednesday, December 6th, at that stoplight, excitedly, anxiously, staring at each other, staring at my phone, with wide eyes and hopeful hearts.

The first 15 seconds, exactly the same as the two false alarm calls. “I know you and Jesse want to make these decisions together. Do you think he’s available and we can add him to this call?”

“Okay, great. Would you mind putting me on speaker so he can hear, too?”

We’re one step ahead. We’re ready. We’ve been freaking ready.

She starts telling us about a little girl. The only girl in the files they finally received from a specific partner orphanage in China, from a city that oddly looks like and reminds me of San Diego.

As we pull into a parking lot near that stoplight, she goes on to say she does have some special medical needs that we didn’t check off on our list but she wanted to call and tell us about her anyway because she is so young. She tells us she’s 18 months. Jesse and I look at each other, knowing this is rare. Few and far between. Part of the reason we’re almost exactly 12 months into the estimated 4-10 month wait.

She says, “Her birthday is…” My heart stops. I think for a quick second we might share a birthday, but what she says next is even better. Something so precious I could have never dreamed it up myself. (We will be able to share after our adoption is final.)

Later, after doing the math, we realize she was actually about 16 months the day we got the call. Super young. Super uncommon.

Turns out her special need is also rare. Something we’d never heard of but have researched like crazy since we got the call.

We sat in that parking lot and soaked up every last word. Her file had just come in from China and needed to be reformatted before they could send us her medical records, any and all information they had about her and any photos and videos. And so, we learned of this little love muffin at 11am on December 6th but didn’t actually receive her file until the morning of December 7th.

The 2.5 weeks that followed were agonizing as we waited on China to answer our questions. As we waited for updated information. As we emailed and waited on doctors to review her medical reports. As we prayed. As we surrendered our plans, our thoughts about what this all might look like.

On December 19th, we received China’s answers to some of our questions. I read the email for the first time out loud to Jesse and sobbed my eyes out. Relief of good news.

On December 20th, we received another email with updates. This time, as we scrolled down through the message to see the new photos, a little head of dark hair and straight bangs stared us in the face. Jesse says he knew then because of this. I think I knew when I learned her birthday on that December 6th phone call.

Christmas has always been a little rough around the edges for me. I love what it really stands for but find myself so adverse to so much of it because of past hurts and disappointments in my life. But now, that will forever be changed.

For 5 years, we sought the Lord. His timing, his grace, his hope, his strength, his peace, his mercy, his faithfulness. And heartache after heartache, he alone restored us. Because of that, because of him, I don’t believe it’s a coincidence that we confessed our yeses to each other and emailed our agency on Christmas Eve morning, joyfully, excitedly, graciously accepting the referral of our daughter.

God redeemed Christmas for me. Forever. From here on out, I’ll always know and remember that long December that ended Christmas Eve morning with gratitude I can’t begin to explain.

We finally, finally know who our darling girl is.

Created and loved by our incredible God, who so unbelievably has entrusted her to Jesse and me. She is beautiful. She is rare. We’re told she is active, has a ready smile and loves being amused. We’re also told she’s taken outside to “bask in the sun” and taught to learn about the flowers and grass. Doesn’t that sound just like our sunshine girl?! Doesn’t she fit just perfectly into our lives and our hearts?! She settles right in to the name we’ve had for her before we even knew her…

(Pronounced VAIR-uh.)
Vera has been at the top of our list for years now. When we saw her sweet face, each of us decided that yes, she is Vera.
In Russian, it means faith. Our entire journey to her has been just that. Faith that God would deliver on a conviction he stirred in our hearts.
In Albanian, it means summer. Which is the season she was born. All three of us have summer birthdays.

Lynn is my mom’s middle name.
I was named after my grandmother, Rebecca.
Call me a sucker for sentiment, but we’re keeping the tradition alive.
In Gaelic and Old English origin, it means lake, waterfall or pool. Perfect for water lovers and waterfall chasers like Jesse and me.

I can not look at her face without experiencing God’s faithfulness.

I can not even begin to share our journey to Vera, without praising the Lord. 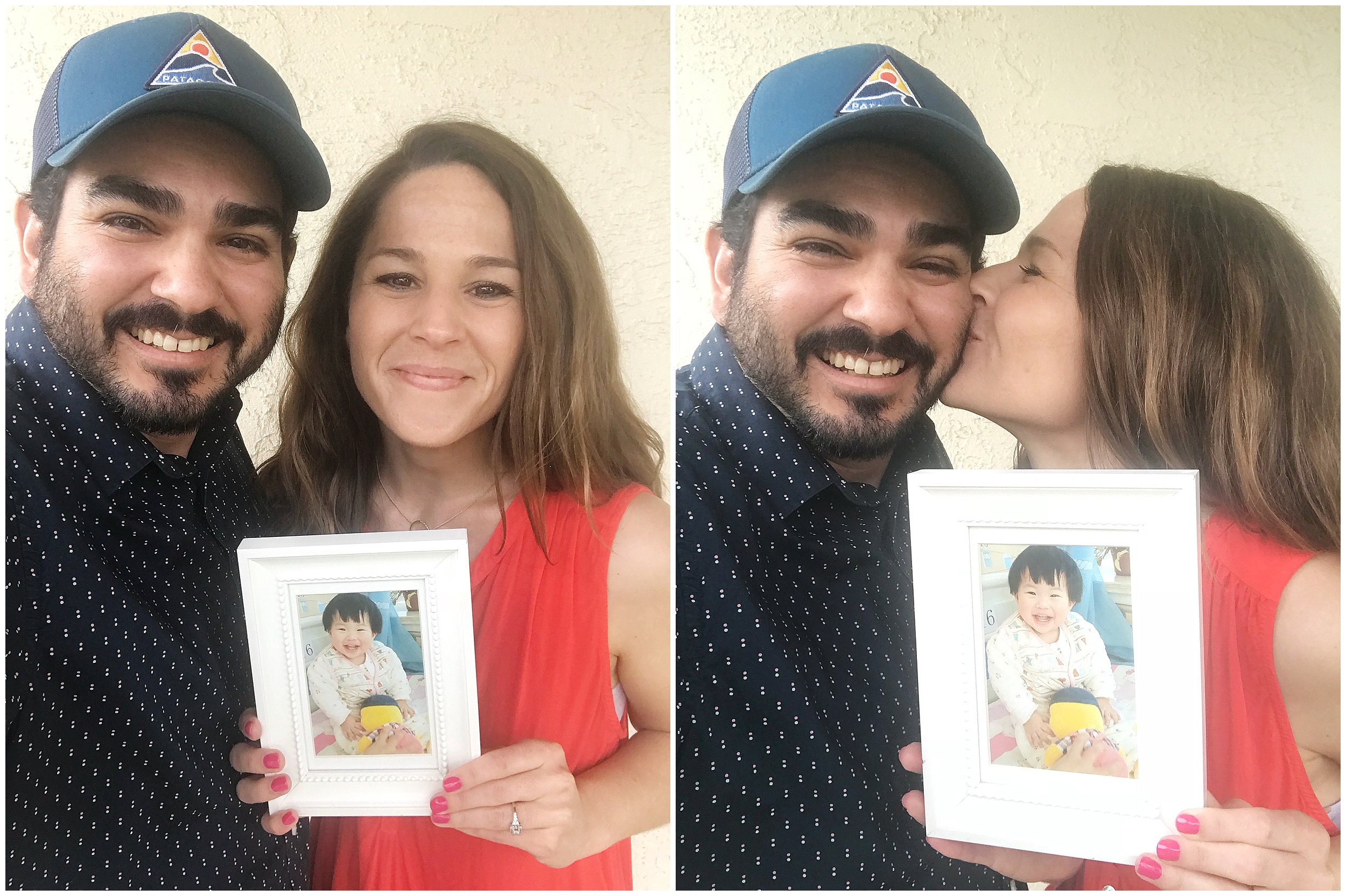 I’m an Enneagram 1 and INFJ, if you’re into those things as much as I am. Oh, and I’m a writer and podcaster I write a lot about motherhood, infertility, adoption, the beautiful gifts God has shown me time and time again and the freedom we have in Jesus to come undone.

Get My Go-To Guide for Letting Go + Living Freely!

Listen to the Episode

Enter your email below to be the first to know about new podcast episodes, ways I am learning we are all truly #freetocomeundone and get your Go-To Guide for Letting Go and Living Freely right away!